Own your unit now in Arena City Towers Compound 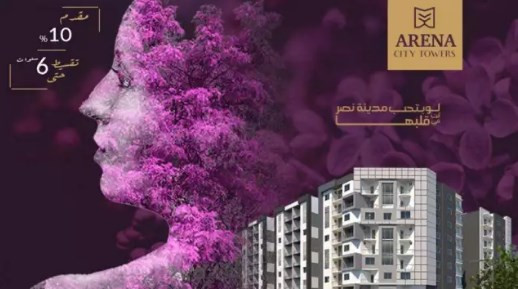 Arena City Towers is one of the integrated residential compounds that are located in the center of Cairo, and it was executed on the highest level of the engineering designs.

The purpose of the project is to introduce a developed and large residential compound in the center of Cairo, and the company worked on designing the compound with a modern and classy way that suits the general taste.

The project also presents many important things for the residents as space and the units' division and it was executed on 4 phases.

what makes Arena City Towers Compound so special today is its unique location in the center of Cairo especially inside Madinet Nasr.

The location of the compound is quiet and populated but also not crowded, and the compound can be reached through many roads as it's near many vital points in Cairo like:

All Information about The Most Important New Cairo Compounds

The compound was constructed on 55,000 square meters in the center of Madinet Nasr.

The residential units in the compound were designed on apartments' shape also the units were constructed on a small space from the total space of the project.

Who's the executing company of Arena City Project?

Structure Line for real estate is considered the executing company of Arena City Towers Compound in Madinet Nasr, and it's from the Saudi important companies in the real estate developing world and it has many important projects.

The company seeks through this project to present many new and important concepts about the real estate investment and it designed it on the latest international designs.

Know more about the services in Arena City Towers

The company provided many services inside the compound like:

Click Here For Details about Compounds in Fifth Settlement